Reaktor Education is now MinnaLearn. Read more!
Rethinking HealthSocietal value-based healthcare Why invest in health – and how to measure it

Why invest in health – and how to measure it

In the previous section, we started seeing the multiple determinants of health and the wider range of approaches necessary to improve individual and population health.

Now let’s move on to the next question: why is it worth investing in health?

We all value health. Without our health, we would not be able to live the life we wish to, go to school or work, enjoy our hobbies, or spend time with families and friends. Health is a fundamental human right. Society and government have an ethical obligation to ensure that people are healthy, safe, and protected. A healthy population is more productive and can give back to society. And likewise some aspects of health created by society are a public good, which benefits everyone.

Health and wealth: the bidirectional arrow

Wealth can lead to health, as it allows one to purchase more of it. A higher income gives greater access to many of the goods and services that promote health, such as better nutrition and access to safe water, sanitation, and high-quality health services.

The opposite is also true: there is a causal link running the other way from health to income. Healthier populations tend to have higher labor productivity, because their workers are physically more energetic and mentally more robust. They suffer fewer lost days of work due to illness, either their own or their families’. Poor health on the other hand contributes to reduced income, creating a negative feedback loop sometimes referred to as the health-poverty trap. Healthier people who live longer have stronger incentives to invest in developing their skills, because they expect to reap the benefits of such investments over longer periods. Increased schooling promotes greater productivity and, in turn, higher income. Improvements in longevity create a greater need for people to save for their retirement. Insofar as increased savings lead to increased investment, workers will have access to more capital and their incomes will rise.

Take obesity as an example – people with more resources are able to afford nutritious food, exercise facilities, and safe neighborhoods to boost physical activity that help them to be more fit than those with less resources. A review of the literature on the effects of low socioeconomic status (SES) and the risk of developing type 2 diabetes mellitus in obese persons found an association between low SES and obesity and diabetes. The quality of food seems to be lower in the more disadvantaged social classes, with a higher intake of fat and simple carbohydrates and less fruit, vegetables, and whole wheat. Lower income neighborhoods, often less safe and without exercise facilities, are also associated with physical inactivity. On the other hand, the burden of obesity goes beyond the health sector. There is evidence that it has a substantial impact on lost productivity among workers with obesity, especially through absenteeism and presenteeism. This illustrates the bidirectional arrows from health to wealth and wealth to health.

Non-excludable means that individuals cannot be excluded from using this resource. Non-rivalrous means that the use by one individual does not reduce availability to others. Examples of public goods are fresh air and water, law enforcement, national defense, sewer systems, and public parks. This is in contrast to a common good such as wild fish stocks in the ocean, which are non-excludable but rivalrous to some degree (if too many fish are caught, stocks will be reduced).

Health as a public good

A public good, also known as a social good or collective good, is defined as something that is both “non-excludable” and “non-rivalrous”.

Health is generally not considered a public good, because non-paying individuals may not be able to achieve good health. Private health insurance, nutritious food, and quality housing in a safe neighborhood are all examples of private goods, which are both excludable and rivalrous. Efforts to introduce universal health coverage in all countries will move healthcare closer towards being a public good. The adoption of social insurance systems or other publicly financed health insurance, where all citizens are insured and can utilize healthcare services regardless of whether they can afford it or not, suggests that insured health services then become non-excludable and non-rivalrous, better approximating a public good.

However, there is an argument about whether to regard public health as an example of a public good:

If we are to strive for a healthier society, we need to be able to measure it, over time and across different populations. But how do we measure population health?

The most simple and frequently used indicator is average life expectancy at birth. It is often assumed that if a country has high life expectancy, it is healthy. Life and death may be the simplest things you can measure. It is clear, however, that health is about much more than how many years people live on average.

Let’s take Europe as an example. There has been an important and consistent reduction in mortality, particularly in the young and middle aged, that has led to a substantial increase in life expectancy in all 28 countries within the EU in the last 40 years. Even within the relatively recent period of 2003–2013, there was an increase in life expectancy of 3.2 years for men and 2.5 years for women overall in the EU.

While these trends represent a major success for public health, they hide less positive developments, including major health disparities. Across Europe there are major differences in life expectancy, of over 10 years for men and over 7 years for women. These differences are most extreme between southern Mediterranean Europe and the countries of central Europe and the Baltic region.

Moreover, not all of this increase in life expectancy is ‘healthy life expectancy’. For example, on average in Europe, a man and a woman at age 65 will have a life expectancy of approximately 18 and 21 years respectively. However, only 9 of these will be years lived in good health. The remaining are characterized by age-related morbidity due to one or more chronic diseases (multimorbidity), resulting in a reduction in quality of life and increasing cost for healthcare budgets.

The below figure shows the broad determinants of population and individual health. Health needs to be measured in multiple ways at a population level because it is multi-dimensional. 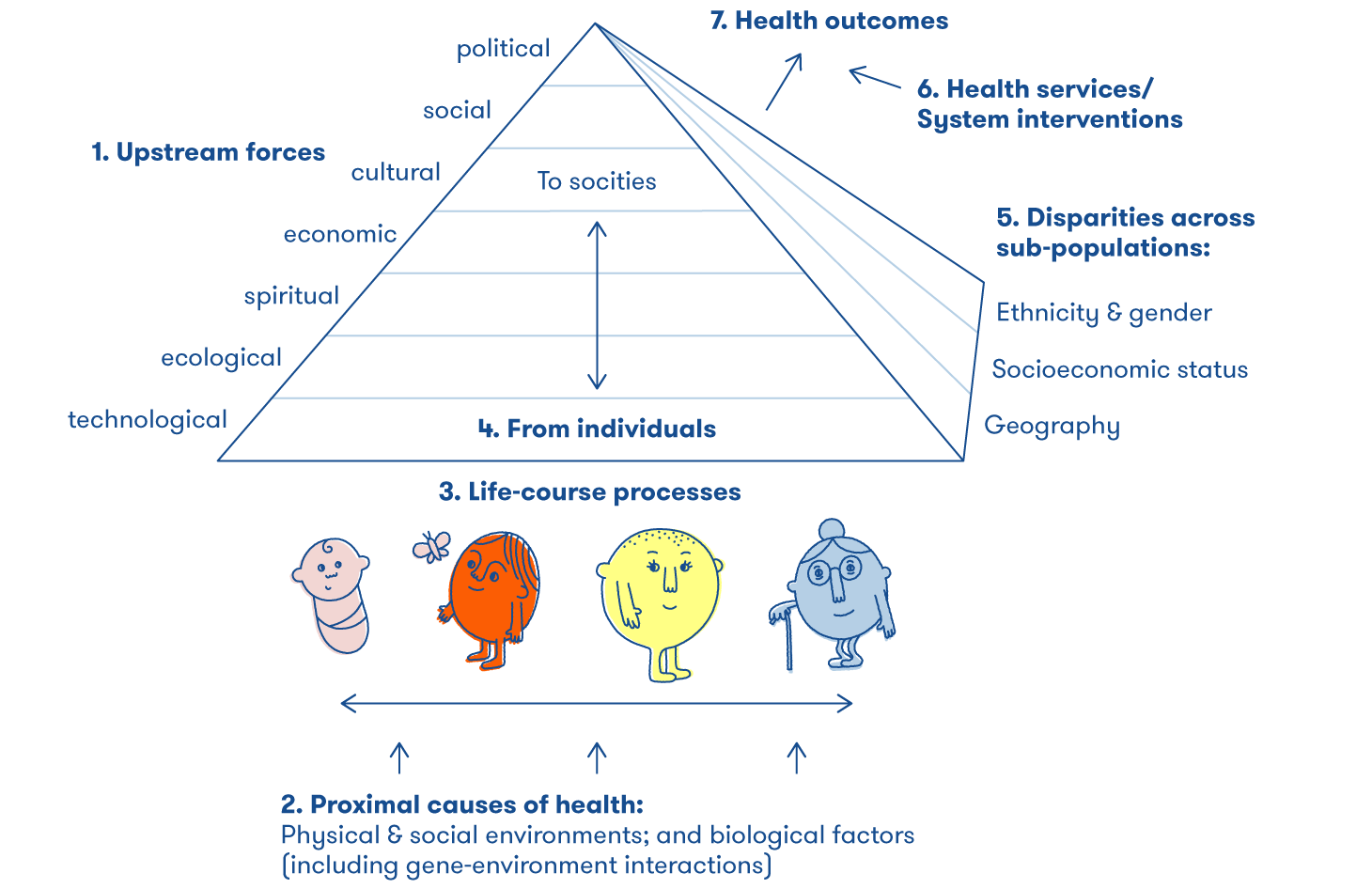 For example, present-day censuses in many countries collect a lot of data on basic determinants of health: income, work, housing, immigration/language, and family/household relations. The registration of vital statistics (births and deaths) are the oldest continuous and most established type of population health data. Many developing countries are still in the progress of developing reliable systems for recording vital statistics. In recent years, the availability of data has drastically changed population health research as more databases become available and are linked to each other. More longitudinal surveys have been made available and there is progress in maps and ICF classification.

The amount of health or ill-health attributable to an intervention or determinant of health is often of interest to decision-makers. A common approach is to calculate “population attributable risk”, which is affected by the prevalence in the population of the causative exposures or determinants being examined, as well as the strength of their association with the health outcome

Source: Muller et al. 2016. Estimates from the GBD are taken from the website http://vizhub.healthdata.org/gbd-compare. They are the estimated attributable fractions for death in western Europe for the age range 50–69 years for each risk factor.

Building on data in life tables, summary measures of population health (SMPH) include information on mortality and morbidity. SMPH falls into two general categories: 1) health expectancies (HE) and 2) health gaps. Health expectancies go beyond purely mortality-based calculations of life expectancy to determine how long people can expect to live without certain diseases or limitations on their normal activities. Health gaps choose a norm or goal for the population (such as an average age at death of 75), and quantify the difference between the actual health of the population and that goal. Disability-adjusted life years (DALYs) remain the most commonly used health gap measure.

Here we cover some of the key concepts and definitions:

Gesund Partners is a hands-on Strategy Consultancy focusing on value-based health and social care transformation. We take a holistic view into one’s wellbeing and foster innovative partnerships to radically challenge the status quo.

MinnaLearn partners with world-class organisations and education providers to develop online courses and digital learning solutions designed to empower all people to participate in a rapidly-evolving globalised society.