The principles of Quadruple Aim

People all recognize the importance of healthcare and the health system and the need for these to be responsive to changes and perform well. Triple Aim has been an approach to optimizing health system performance and proposes that healthcare institutions simultaneously pursue three dimensions of performance: improving the health of populations, enhancing the patient experience of care, and reducing the per capita cost of healthcare.

Even though Triple Aim had been widely accepted as a roadmap to optimize health system performance, physicians and other members of the healthcare workforce report widespread burnout and dissatisfaction. Burnout is associated with lower patient satisfaction, reduced health outcomes, and potentially increased costs. Such a burden on health providers thus imperils the Triple Aim goals. For this reason, it has been recognized that Triple Aim needs to be expanded to Quadruple Aim, adding the goal of improving the work life and wellbeing of healthcare providers, including clinicians and staff.

How do we define quality of care?

On the basis of several definitions in the literature, including those from World Health Organization (WHO) and the United States National Academy of Medicine, quality of care is:

“The extent to which healthcare services provided to individuals and patient populations improve desired health outcomes. In order to achieve this, healthcare must be safe, effective, timely, efficient, equitable, and people-centered.” 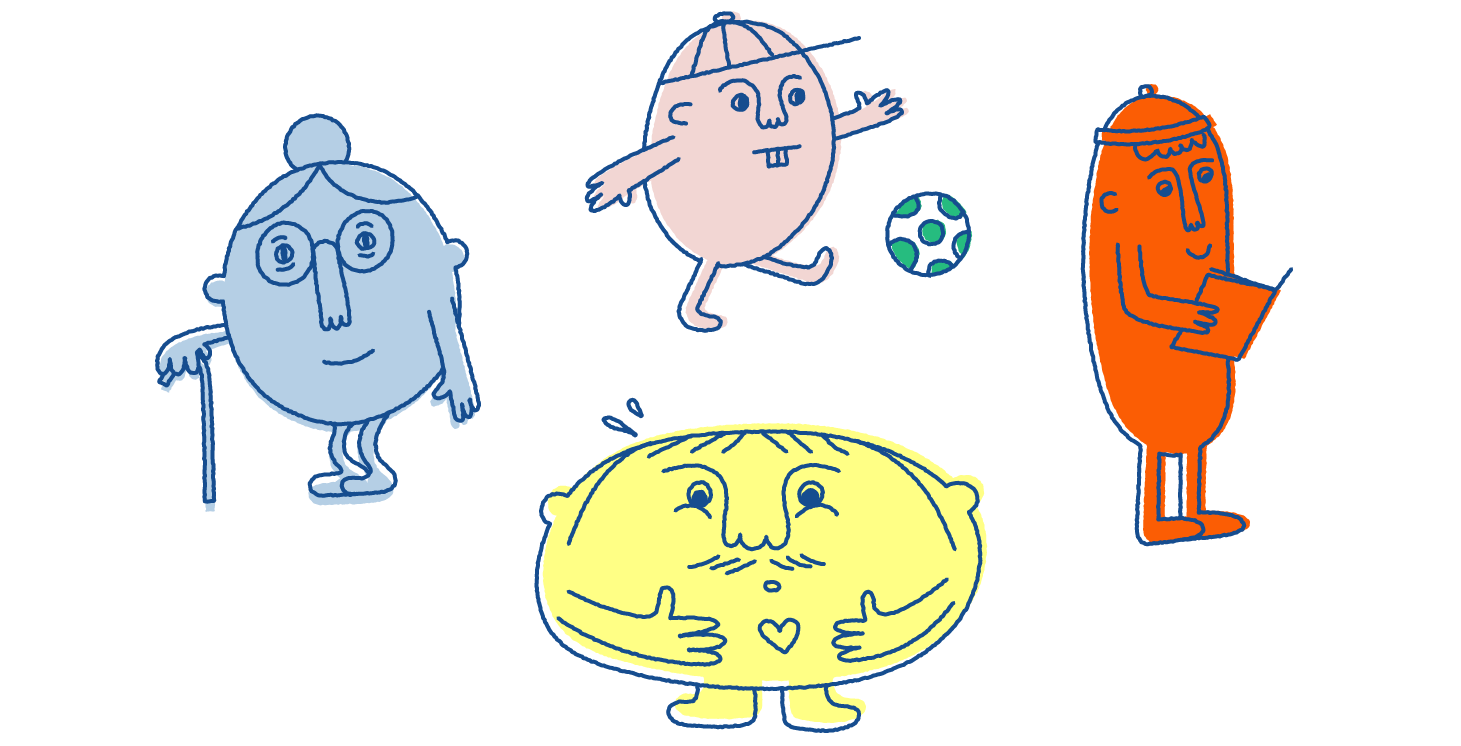 Effective – provides services based on scientific knowledge and evidence-based guidelines.

Efficient – delivers healthcare in a manner that maximizes resource use and avoids waste.

Equitable – delivers healthcare that does not differ in quality according to personal characteristics such as gender, race, ethnicity, geographical location, or socioeconomic status.

People-centered – provides care that takes into account the preferences and aspirations of individual service users and the culture of their community.

Quality of care is important, however it is often harder to measure than quantity of care. It is easier to track the number of children immunized than whether the cold chain worked seamlessly throughout the vaccine life cycle, or whether the children received the right combinations at the right ages with sufficient information communicated to their parents.

Following Donabedian’s theory, the framework proposes three dimensions of quality of care that need to be tracked and, ideally, linked:

In high-income countries, the main measures of quality have typically been patient outcomes that are sensitive to healthcare practices, such as the association between skilled nursing and hospital readmissions.

The United Nations’ Sustainable Development Goal 3 aspires to ensure health and wellbeing for all, including a bold commitment to end the epidemics of AIDS, tuberculosis, malaria, and other communicable diseases by 2030. It also aims to achieve universal health coverage, and provide access to safe and effective medicines and vaccines for all.

Moreover in Europe, the concept of solidarity is deeply rooted in its history. The political commitment to universal healthcare is enshrined in Article 35 of the Charter of Fundamental Rights of the European Union.

Finland and Health in All Policies

Health in All Policies (HiAP) is a collaborative approach that integrates and articulates health considerations into policymaking across sectors to improve the health of all communities and people. Health in All Policies recognizes that health is created by a multitude of factors beyond healthcare and, in many cases, beyond the scope of traditional public health activities.

The international roots of Health in All Policies can be traced back to 1978 and the Alma-Ata Declaration which emphasized the role of sectors other than health in the creation of a healthy society: “…the highest possible level of health is a most important world-wide social goal whose realization requires the action of many other social and economic sectors in addition to the health sector”. In Finland, the roots of HiAP go back to 1972 when the Economic Council of Finland, chaired by the Prime Minister, launched the ‘Report of the working group exploring the goals of health’. Finland was one of the first countries to adopt a ‘healthy policies’ approach to address public health concerns and has been a continuous champion of the Health in All Policies approach.

Globally, a significant milestone was achieved in 2013 at the 8th Global Conference on Health Promotion (8GCHP) in Helsinki, Finland, which had Health in All Policies as its main theme. In the run up to the conference, the concept was also defined and agreed by the international community for the first time. According to the Helsinki Statement on Health in All Policies:

“Health in All Policies is an approach to public policies across sectors that systematically takes into account the health implications of decisions, seeks synergies, and avoids harmful health impacts in order to improve population health and health equity. It improves accountability of policymakers for health impacts at all levels of policy-making. It includes an emphasis on the consequences of public policies on health systems, determinants of health, and well-being.” 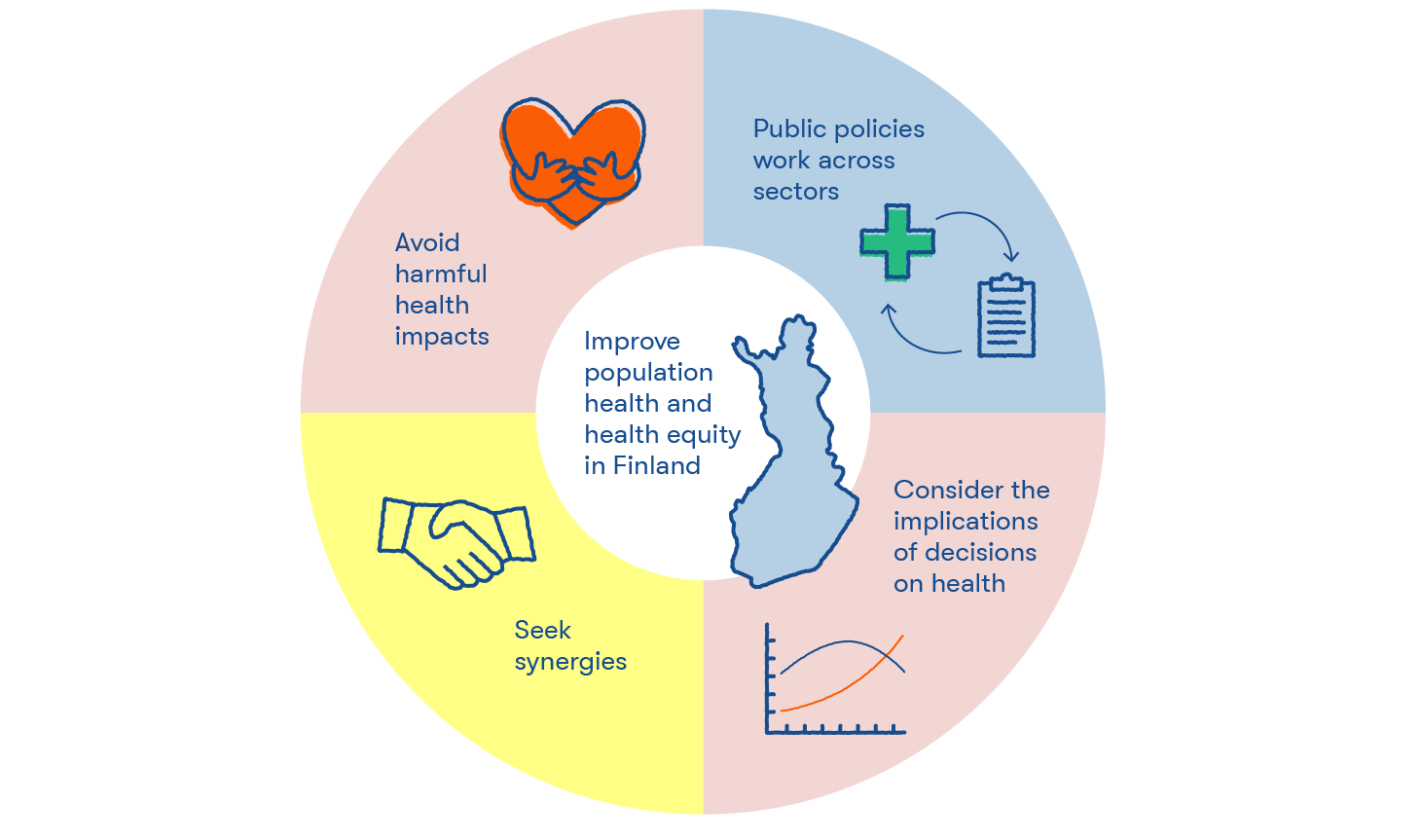 The economy of wellbeing

In the economy of wellbeing, public resources are allocated for improving people’s wellbeing. Wellbeing has the effect of making people healthier, more innovative and productive, and they work and pay taxes. The economy of wellbeing approach means that a virtuous circle of policies is created where wellbeing and economic growth reinforce each other, profiting both people and society as a whole.

The Council of the European Union adopted the conclusions on the economy of wellbeing at the second Employment, Social Policy, Health and Consumer Affairs Council (EPSCO) under Finland’s Presidency on 24 October 2019. In its conclusions, the Council calls on the European Commission and the Member States to integrate a cross-sectoral economy of wellbeing perspective into all policy areas of the EU and the Member States.

The economy of wellbeing approach aims to ensure inclusion and equal opportunities for all. Investing in wellbeing makes sense in economic terms even in times of economic downturn. Research has shown that investing in human capital has significant returns. Studies indicate that investing in education and training gives a significant boost to economic growth. There is also evidence that efficient preventive health services pay for themselves many times over. Yet at present, preventive services account for only 3% of health budgets in the EU, while curative services account for 97%.

Let us now go back to the million dollar question: What makes you happy?

Finland and the other Nordic countries may have some hints for us. Every year since 2012, the World Happiness Report has ranked countries by how happy their citizens perceive themselves to be, according to their evaluations of their own lives. The World Happiness Report 2020 included 156 countries and ranked Finland the happiest country in the world for the third consecutive year. Finland’s average scores continued to trend upwards and are now significantly ahead of second-place Denmark, while the other three Nordic countries were also included in the top 10.

It needs to be clarified at the outset that the scores used for the ranking are based on individuals’ own assessments of their subjective wellbeing, as indicated by their survey responses in the Gallup World Poll. Some media outlets have reported inaccurate information on this. The happiness rankings in the World Happiness Report are based on individuals’ own assessments of their lives, as revealed by their answers to the Cantril ladder question that invites survey participants to imagine their current position on a ladder with steps numbered from 0 to 10, where the top represents the best possible and the bottom the worst possible life for themselves.

The report then provides additional analysis on how six key variables contribute to explaining the full sample of national average scores over the years in which the report has been published and data collected. These variables are GDP per capita, social support, healthy life expectancy, freedom, generosity, and absence of corruption. They use the six variables to explain the variation in happiness across countries, and also to show how measures of subjectively experienced wellbeing, especially positive affect, are themselves affected by the six factors and in turn contribute to the explanation of more positive life evaluations. Not surprisingly, being healthier is associated with being happier.

The latest World Happiness Report 2020 even conducted an in-depth look at Nordic exceptionalism, pursuing the question: “What Explains Why the Nordic Countries Are Constantly Among the Happiest in the World?” The analysis concludes that Nordic countries are characterized by a virtuous cycle in which various key institutional and cultural indicators of good society feed into each other, further advancing the society. Such indicators include well-functioning democracy, generous and effective social welfare benefits, low levels of crime and corruption, and satisfied citizens who feel free and trust each other and governmental institutions. 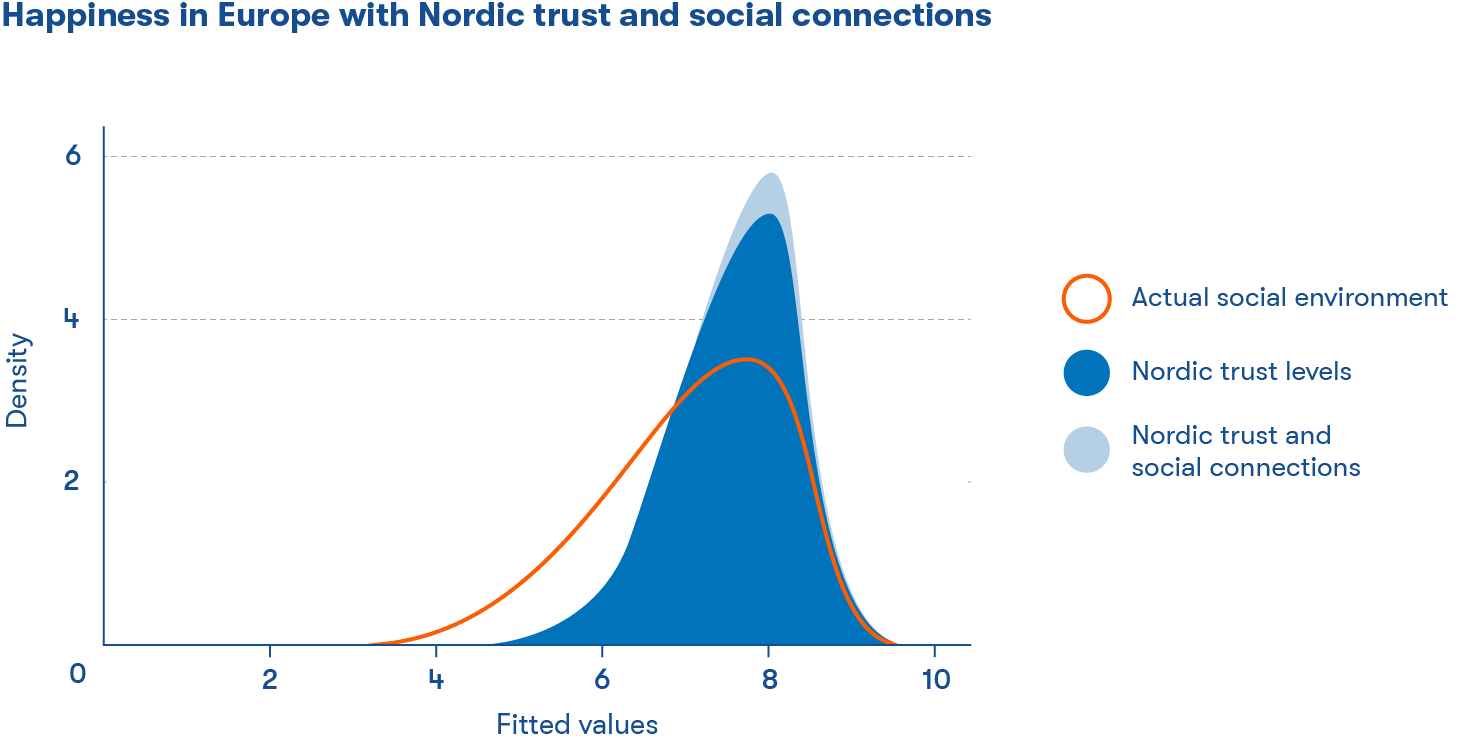 General health ranks highest on the Nordic list of life circumstances most closely associated with being unhappy. In this respect the Nordic countries deviate from the United States, Australia, and the United Kingdom, where mental illness tops the list. In the Nordic region, it is predominantly older people who experience failing health. Mental health was the second most important life circumstance associated with happiness and unhappiness. Clearly, being healthy is associated with being happy, and health is increasingly being recognized as fundamental to our individual and societal wellbeing.

After completing Chapter 1, you should be able to:

See further reading and the references used for chapter 1.

You reached the end of Chapter 1

Gesund Partners is a hands-on Strategy Consultancy focusing on value-based health and social care transformation. We take a holistic view into one’s wellbeing and foster innovative partnerships to radically challenge the status quo.

MinnaLearn partners with world-class organisations and education providers to develop online courses and digital learning solutions designed to empower all people to participate in a rapidly-evolving globalised society.